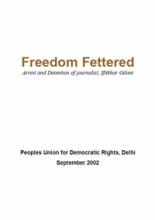 Journalist organisations as well as the Editors Guilds vociferously campaigned against the promulgation of the Prevention of Terrorism Act (POTA).

They found in POTA certain clauses which seemed to be aimed directly against media organisations and media persons. The opposition to the law subsided after the offending sections relating to the disclosure of sources and reporting of views of terrorist organisations were dropped by the government. PUDR conducted a fact finding into the incidence of arrest and detention of Iftikhar Gilani, Delhi Bureau Chief of the Kashmir Times and the Indian correspondent for the Pakistan based daily, The Nation, and met the family and the police. Following is a brief report which draws attention to the ways in which the State converts a journalistic act of information gathering first into a crime concerning national security and then in addition into an offence related to pornography.