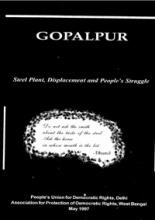 IN August 1995. a Memorandum of Understanding was signed between Tata Iron and Steel Company (TISCO) and the Government of Orissa for the setting up of a steel plant and township, near the well-known Gopalpur beach and port, in Chhatarpur and Berhampur blocks of Ganjam district in Orissa.

The plant is being projected by the government as well as by TISCO as a model solution needed to address the lack of development in the state. The project, popularly referred to as the Gopalpur Project, involves the acquisition of over 7,000 acres of land covering 16 revenue villages. However, residents of these villages started protesting against the acquisition of their lands soon after the Memorandum of Understanding was signed. An umbrella organisation called the Gana Sangram Samiti (GSS) was formed, actively supported by the local unit of the CPI, with membership panning across political affiliations. The Samiti unconditionally rejected the compensation and rehabilitation package announced by the government. In July 1996 the state government used the National Security Act against a leading member of the Samiti. Reports of lathi charges on villagers by the police, to forcibly survey their land for acquisition purposes. reached the national press. In this context a six-member joint fact-finding team from Association for Protection of Democratic Rights (APDR), West Bengal, and Peoples Union for Democratic Rights (PUDR), Delhi, visited the 11 revenue villages falling within the proposed project site in September. 1996. The team met the residents of these villages, those injured in lathi charges. officers from the district administration, police officials, local medical authorities, concerned citizens in Berhampur town, activists of the Gana Sangram Samiti and representatives of TISCO. The following is the report of the team.