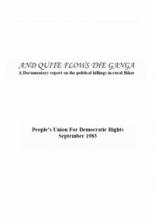 For many outsiders Bihar evokesimages of crime, corruption, and caste wars. Sensationelized reports of caste conflicts, the periodical exposure of scandals in high places and regular news of criminal gang operations from Bihar greet newspaper readers with unfailing regularity. But behind these 'popular' perceptions lie the bitter struggles of ordinary peoply which are unnoticed, unreported, and uncared for.

Contemporary Bihar is a web of social contradictions. In the North and South Bihar plains the social contradictions are located in the agrarian structure. The inequitable distribution of land and more specifically the low wages are at the root of these tensions. The major contradictions that afflict the social reality of Bihar are between the landed elites and the landless; the upper castes and the lower castes; the workers on the one hand and the industrialists and the trade union mafia on the other; between tribals and foresters; and finally between the tribals and the non-tribal outsiders.

Presented here in this report is a grim catalogue of death in a series of 48 incidents in which 185 people have been killed over a period of 182 weeks from January, 1980, to June, 1983. The People's Union For Democratic Rights hopes that this report will help a larger number of people to become aware of the sordid tale of the uninterrupted political killings in rural Bihar.