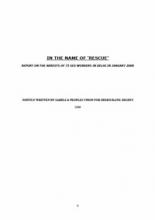 As the reports on the raid and rescue operation in red light area in Delhi were flooding news channels, PUDR along with Saheli took up the issue of the violation of the rights of sex workers, one of the most stigmatized communities in society.

The ‘raid and rescue’ operation on GB Road by the CID, Andhra Pradesh and Crime Branch, Delhi, raises a host of questions and repeats many patterns of violations against sex workers seen all over the country.It is ironic that in an operation that purports to ‘rescue’ sex workers, the dominant narratives are of the inhuman treatment of the women during the operation, verbal abuses of sexual nature, manhandling and violence by male police personnel, and alleged sexual assault before they were handed over to judicial/protective custody!