On 28 November 2020, the BJP state government in Uttar Pradesh enacted the Prohibition of Unlawful Religious Conversions Ordinance criminalizing “unlawful” conversions which have been secured by “misinterpretation, force, undue influence, coercion, allurement or by any other fraudulent means or by marriage”. On 26 December 2020, the BJP state government in Madhya Pradesh followed suit by enacting the Religious Freedom Ordinance 2020. Over the past four years, four BJP state governments have enacted anti-conversion laws, with Jharkhand and Uttarakhand enacting the Freedom of Religion Acts in 2017 and 2018 respectively.

While the Jharkhand and Uttarakhand laws continue the decades-long legacy of criminalizing conversions outside the so-called “Hindu” fold in attempts to “Hinduise” adivasis, the UP and MP Ordinances expand their ambit to criminalize conversions by marriages, mass conversions, while also targeting associations and organizations. The UP Ordinance introduces a punishment of 1-5 years of imprisonment for unlawfully converting another, with enhanced punishments for converting minors, women, members of Scheduled Castes and Scheduled Tribes, and mass conversions, potentially inviting draconian sentences extending to 20 years imprisonment. Heads of organizations/ institutions are also liable to imprisonment, along with a cancellation of registration. Pertinently, “reconversion” to a previous religion is not criminalised. Other draconian provisions of the law include a reversal of burden of proof, and the strengthening of police powers without any oversight to conduct inquiries into allegations of so-called unlawful conversions.

Introduced under the bogey of “Love Jihad”, these anti-conversion laws need to be understood in light of virulent attempts of the Hindu Right to consolidate a pan-national “Hindu” identity. The flipside of this are targetted attacks on dalits, adivasis, women, sexual and religious minorities and institutions.

The UP and MP Ordinances particularly introduce police powers of the State to control women’s bodies, sexualities and autonomy to further a politics of strengthening endogamy and Brahmanical family forms. Against a long history of vigilante attacks and atrocities on inter-caste and inter-faith consensual relationships, the State becomes complicit in violence against women and men exercising sexual autonomy. Relevant to note that the Ordinances empower any “aggrieved person” to lodge an FIR against a suspected unlawful conversion, and the police has unrestrained and unchecked powers to intercede. “Love Jihad” continues the branding of Muslim men as “terrorists”, in a context where a large number of Muslim men are incarcerated or under suspicion under anti-terror laws solely on the basis of their identities. The immediate aftermath of the Ordinance testifies to this State complicity with vigilante violence, where within 30 days the UP police had registered 14 cases, made 51 arrests out of which only 2 have been released on bail, and also interrupted marriages. 13 of these 14 cases relate to Hindu girls in consensual relationships with Muslim men.

Rendered invisible behind this criminalization of “conversions” are expansive attempts of right-wing cultural organizations like the RSS, VHP, Bajrang Dal and others seeking to “Hinduise” dalits and adivasis, permitted under the law under the guise of “reconversion” or ghar wapsi. While the 1990s witnessed targeted attacks on Christian missionaries in Odisha for so-called fraudulent conversions, as in the gruesome murder of Graham Steines by the Bajrang Dal, the past few years have witnessed reinvigorated attempts at communal polarization and atrocities against Muslims and Christians in Jharkhand. Popular demands for the enactment of a Sarna Code arise simultaneously with the enactment of the Jharkhand Act in 2017, which has been viewed as an attempt to fragment struggles for land rights. In also criminalizing mass conversions, these spate of laws neglect the long history in the subcontinent where conversions have been a political, social and spiritual srategy of resisting inequalities and indignities of Hinduism, especially of its oppressive system of caste hierarchy. Conversions to Sikhism, Buddhism, Islam and Christianity are a part of this long tradition of staking claim to equality, dignity, and socio-economic rights.

This public meeting on Conversions, Personal Freedoms and the State, organised on 30th January 2021, was an attempt to understand these spate of anti-conversion laws against the larger cultural agenda of the Hindu Right towards hinduisation by curbing fundamental freedoms of religion, autonomy and sexuality. 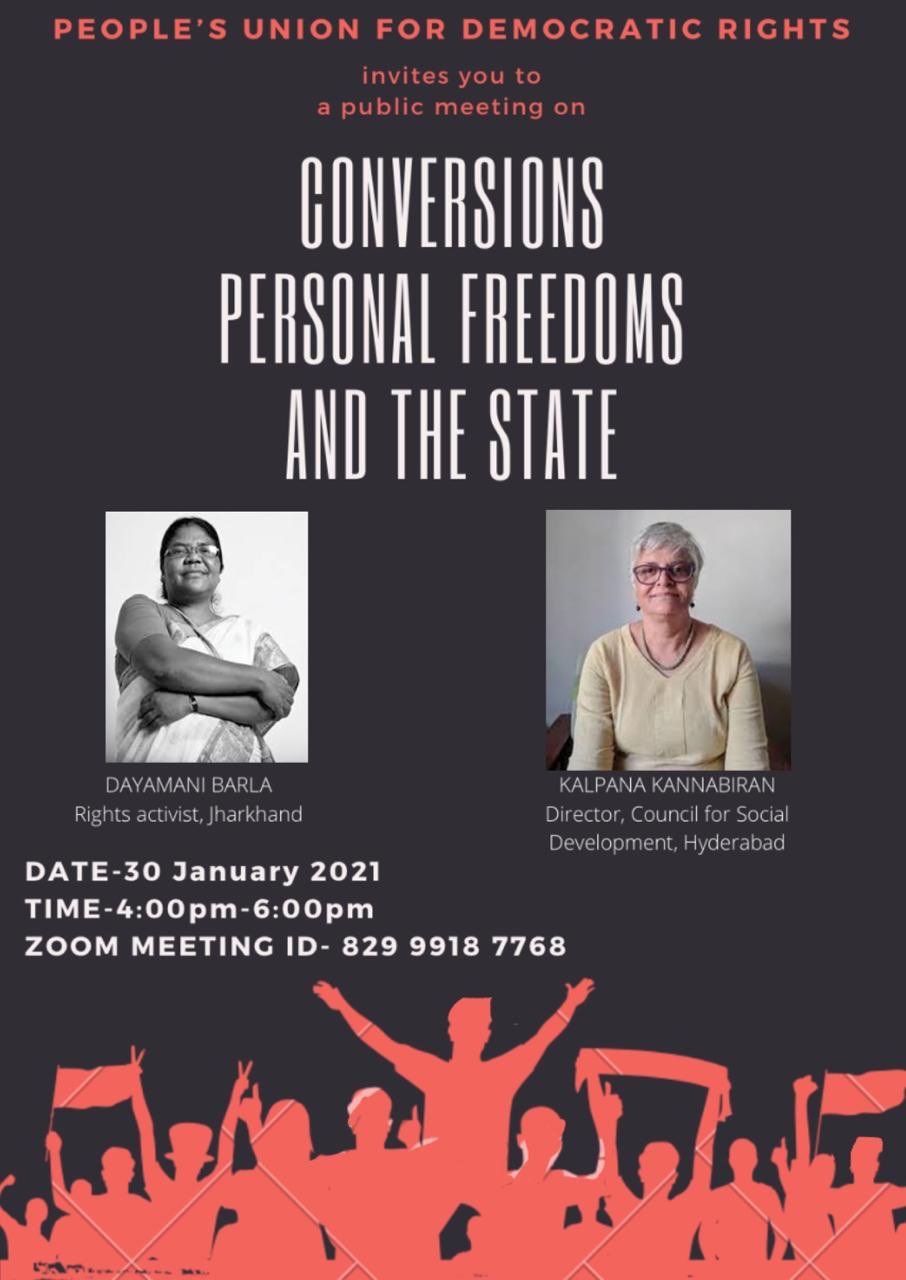