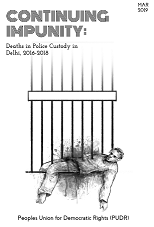 Peoples Union for Democratic Rights (PUDR) has been investigating incidents of deaths in police custody and publishing reports on these from the 1980s. These investigations revealed that these deaths were most commonly the unintentional consequences of custodial torture, which in turn was part of routine police practice. In recent years, PUDR had stopped investigating and publishing reports on each incident of death in police custody since it appeared that the matter was getting greater publicity, and action seemed to be taken in each case – there was much greater media attention, magisterial inquiries were routinely undertaken, the NHRC took note of each case, and the police seemed be more aware of human rights – justice, it appeared was likely to be done. However as PUDR found and has discussed in this new report ‘Continuing Impunity: Deaths in Police Custody in Delhi, 2016-2018’ (being released today) it seems that the issue of custodial deaths is grappling with the old problems and questions.

The findings from these investigations and follow up discussed in the report are as follows (discussed on pages 33-46 of report):

Based on the investigation of these cases PUDR demands