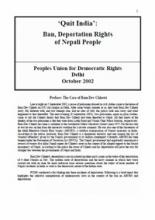 On 5 September 2002, a posse of policemen dressed in civil clothes came to the house of Bam Dev Chhetri on JNU old campus in Delhi.

After some twenty minutes or so, they took Bam Dev Chhetri away. His illiterate wife, and two teenage sons, had no idea of why the police took him away and what happened to him thereafter. The next evening (6 September 2002), two policemen, again in plain clothes, came to tell the Chhetri family that Bam Dev Chhetri had been deported to Nepal.Bam Dev Chhetri's deportation is not an isolated incident and it comes in the wake of the deportation of 4 other Nepalis in July. The sudden spate of deportations and the hasty manner in which they were carried out with no time for legal redressal raise serious questions about the rights of large number of Nepali residents in India as well as the democratic nature of the Indian state.PUDR conducted a fact finding into these incidents of deportation. Following is a brief report that highlights the selective manipulation of undemocratic laws in the context of the ban on ABNES and deportations.