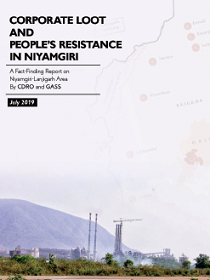 On August 18, a report titled “Corporate Loot and People’s Resistance in Niyamgiri” was released at the CDRO Convention on UAPA and other Draconian Law held in Jalandhar, Punjab.  The report is an outcome of a joint fact-finding visit by a 16-member team from April 26-28, 2019 from All India Coordination of Democratic Rights Organization (CDRO) and Ganatantrik Adhikar Suraksha Sangathan, Odisha (GASS) to villages of the Niyamgiri area in both Raygada and Kalahandi districts of Odisha. The team investigated into the death of the contract employee Dani Batra by the OISF on March 18 at the gate of Vedanta Aluminum Limited and also visited villages of the Dongria Kondhs to understand the major concerns of the people opposing mining of bauxite in their area and violation of their rights.

The major highlights of the report are as follows: