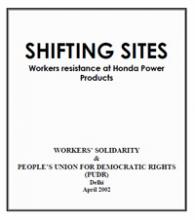 On 25 February 2002, the management of Honda SIEL Power Products Ltd., situated at Rudrapur in Uttaranchal, attempted to remove core machinery from the factory.

They wish to shift the factory's aluminium shop to their plant in Greater Noida, U.P. The attempt was foiled by the workers, who started a continuous watch at the factory gate. To facilitate its shifting, thirty-three workers who operate this machinery were summarily transferred the next day to other departments. They refused to accept the transfers. On 7 March, the thirty-three workers were prevented from entering the factory premises and were handed termination orders. On 8 March, all workers were stopped at the factory gate and asked to sign a declaration certifying that they would not oppose either the shifting or the termination orders. On their refusal to sign, they were prevented from entering the factory. From that day, the 255 workers have been sitting day and night outside the factory gate.
To investigate the circumstances that gave rise to this impasse, the role of the government and the Labour Department in seeking a solution and the question of workers' rights, a three-member investigation team visited Rudrapur on 1 and 2 April. The team spoke to the workers and their union, the management, the District Magistrate and the Labour Commissioner.