Suppressing the Voice of the Oppressed: State Terror on protests against Khairlanji massacre 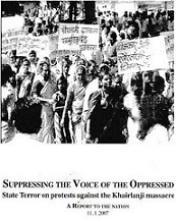 This report is the result of a joint fact-finding conducted by various democratic rights organisations (PUCL Chhattisgarh; Lok Shahi Hakk Sangathana, CPDR, Ramai Pratisthan, Mumbai; PUDR, Samajik Nyay Samiti, Jaatiya Shoshan Virudh Sangharsh Samiti, Sangharshrat Naujawan Sangathan, Dalit Intellectual Forum of Human Rights, Editor Apeksha, Delhi; PUCL, Committe Against Violance on Women, Indian Association of people’s Lawyers, Vidrohi Chalwal, Nagpur   ) in to the brutal suppression of popular protests following the gruesome killings of four members of a Dalit family in Khairlanji village of Maharashtra in the year 2006. Following this horrific caste atrocity, protests erupted in different parts of the state including Nagpur, Bhandara, Amravati, Kamthee, parts of Mumbai etc. The state machinery responded by first attempting to restrict and then to misinform the general populace about the incidents at Khairlanji, and then when protests emerged, by using the brute power of the police. Demonstrations were lathi-charged, tear-gassed and fired upon, homes barged into and Dalit youth arrested, and false charges of being Naxalite- inspired and violent put on them. All these incidents once again revealed the feudal nexus between the upper-caste forces, police, government and media. The report ends by demanding strict legal action against the guilty policemen and others part of the government machinery who attempted to suppress the voice of the people.