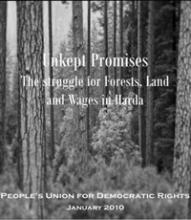 In 2006, the Government of India passed the Scheduled Tribes & Other Traditional Forest Dwellers (Recognition of Forest Rights) Act that legalised individual and collective ownership of land occupied by tribal and non-tribal communities residing on forest lands
traditionally.

The legislation was welcomed by civil liberties groups across the country, as it set the tone for redressing a historical wrong by recognising and granting tenurial and ownership rights to communities, long deprived of these. For the first time, it seemed plausible that the equations that had so far favoured the Forest Department, the sole authority over forest lands, would be reversed with individual and community rights falling into place.

In 2008, the Madhya Pradesh Government came out with a proposed time frame for implementation of the Act. It was estimated that the entire process would be set in motion by early February and completed duly by September 2008. However, the progress towards this has been slow. The delays in setting up mechanisms and initiating the process have resulted in tensions and conflict between people, the forest department and civil administration. Following reports of attacks on activists of the Shramik Adivasi Sangathan and institution of numerous cases and arrests of tribals, PUDR sent a four-member team to conduct a fact-finding in Harda between 5-8th September this year.

The Shramik Adivasi Sangathan is one of the few organisations that has been active since 1996 on issues of poverty and deprivation concerning tribal and non-tribal populations living in the hilly terrains of the erstwhile Gondwana region of Madhya Pradesh. Based on the Gandhian principles of non-violence, the Sangathan has been vocal in drawing attention to issues of caste, class, and gender oppression that characterises social relations between and among communities living in the region. In the course of the fact finding that concentrated on the Sangathan’s work in the district of Harda, the team met various people in Harda town, the Collector, the Police SDO, the DFO, forest officials and watchers, Sangathan activists and residents of various tribal hamlets. The following is the report prepared by the team.