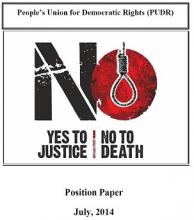 PUDR’s opposition to the penalty of death is three decades old. Like everything else our opposition on capital punishment is evolving and is a ‘work in progress’. Starting with serious objections to the arbitrariness inbuilt in awarding Death Penalty, the fact that almost all death row convicts have come from lower echelons of society convinced us of its unjustness and that in an unequal society even dispensation of justice is stacked against the poor. Secret hanging of Ajmal Kasab and particularly the cold blooded political execution of Afzal Guru, bowing to orchestrated demand for his execution in the name of “collective conscience” made it evident that India’s criminal justice system allows free play for social biases based on class, caste and community.

The capital punishment to Kehar Singh in January 1989, for his alleged involvement in the conspiracy to assassinate Prime Minister Indira Gandhi, evoked strong reaction from the civil liberties and democratic rights groups as he was hanged on the basis of circumstantial evidence. An important intervention for us was in 1996 when we fought for the commutation of death sentence awarded to two Dalit landless labourers, Vijay Vardhan Rao and Chalapthi Rao, who had caused the death of 23 people accidentally by setting a bus on fire.In 2004 when the All India Committee Against Capital Punishment was formed it furthered our movement along the same lines in two cases particularly, the Bara massacre case and Dhananjay Chaterjee case.On a similar note, PUDR, through a petition, tried to avert the hanging of Dhananjoy Chatterjee accused of raping and brutally murdering a young girl in Kolkata in 1990.

The   21st January 2014 Supreme Court judgment which commuted the death sentence of 15 convicts more or less resonated the arguments that we had been building for opposing death penalty. The judgment arose in a matter brought up by PUDR and others before the Chief Justice’s Court. While we rejoice that 15 death sentences have been commuted, there are about 414 convicts on death row, and the Penalty of Death remains in our statue books.

While demanding the abolition of death penalty, PUDR argues also for reform of jails as correctional institutions and for addressing the issue of proportionality between Crime and Punishment, among other issues that need to be taken up simultaneously.